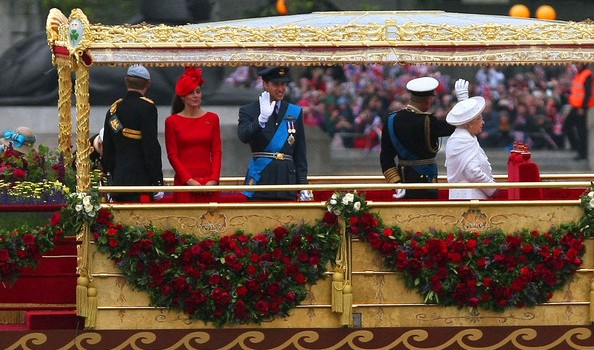 I have spent the last few days baffled by the obvious and deep affection that British have for their Queen.
The celebrations of her 60th anniversary as monarch have been extravagant and genuinely joyful.  People have come from all over the country to wave a flag and cheer an old, distant woman in a flamboyant hat. People who live in my street spent a year fundraising in order to hold a jubilee street party in her honour.  There have been similar festivities across the country (although mostly, it must be said, in England). 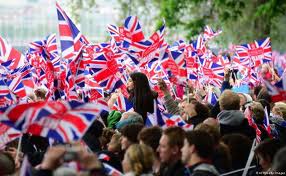 What, I keep asking myself, could explain such devotion?  When I ask people why they love the Queen they offer vague platitudes –  ‘it’s what she represents’; ‘I admire her selfless devotion to public service’ ‘she is such a hard-worker’, ‘she makes us proud to be English’ etc.  It is difficult to pin down what any of these things mean or to understand how exactly they justify the adoration.  The Queen is undoubtedly a dignified, gracious and strong woman who has admirably coped with the challenges that have presented themselves over the years. However the same is probably true of many people’s grandmothers.   Similarly many people work hard in service of the public good.  To give just one example nurses work long hours in difficult conditions in the name of public service and they do so for very little reward (on a nurse’s salary you cannot afford to buy a one-bedroom flat in London, never-mind a palace). Nobody seems to think they deserve special deference because their self-less devotion to the well-being of their patients.  So that leaves us with whatever it is that the Queen represents.

But what does the Queen represent?   But even here it is difficult to understand the adulation.  It is difficult because one of the things she very obviously represents is extensive, blatant and unfair inequality. Above all, it seems to me, that she symbolises an archaic system designed to

concentrate power and privilege in the hands of a small elite. An elite, furthermore, that is not distinguished by its brilliance or any other kind of putative ‘worthiness’. Instead the defining feature of the aristocracy (of which the monarch is the most potent symbol) is nothing less than an accident of birth. It is true that the real power no longer actually rests in the hands of the aristocracy (well not quite – David Cameron and his ministers may be petty-aristocrats but at least they are elected petty-aristocrats). However, the royal family have held on to some of the power and all of the privilege and they have done so at significant cost to the tax-payer.

For me the defining image of the jubilee celebrations has to have been the contrast between the young royals floating down the Thames on more than a million pounds worth of boat having spent the previous night in a palace and the young unemployed people who were coerced into working as stewards for the pageant (for no pay) and after having been forced to spend a sleepless night sheltering from the rain under London Bridge.  Even on a day dedicated to frivolous distraction the profound and frankly shocking inequality of British society managed to bubble to the surface.

The case of the jubilee stewards was a particularly trenchant example of a particularly nasty trend in our society. The basic idea behind this government-sponsored programme is that there are no jobs for young people because companies (even large supermarket chains) cannot afford to pay them.   The aim of the programme is to make it easier for such companies to temporarily employ young people by classifying the employment as ‘work-experience’ for which the young people do not need to be paid or as an ‘apprenticeship’ for which they can be paid substantially less than the minimum wage.  Her Majesty’s government spends billions paying organisations to round up the unemployed youth and shovel them into these ‘opportunities’. The opportunities, in turn, are 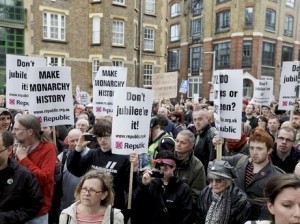 provided by organisations which either make large profits (e.g. the large supermarket chains) or, like the security contractor to the jubilee CPUK,  have been set up primarily to profit from the availability of free labour – they win contracts for which they are paid but without the annoyance of having to pay the people who do the work that services the contracts.
In theory the experience is supposed to help the young get jobs in the future but there is little evidence that this is indeed what happens meanwhile there is plenty of evidence that free workers contribute to the profits of their work-experience provider. Those who start with something get more and those who start with nothing expend a lot of energy and end up with the same nothing they started with. The quality of life of a few improves and the young unemployed are left more desperate than they were before.  The programme which is supposed to be a solution to the problems of joblessness and poverty is actually a mechanism for grinding the poor into lower and lower standards of living.

Whilst this programme is only very nominally anything to do with the Queen – it is her government’s initiative.  However, I do think that the royal family is walking proof that the assumptions which are used to justify inequality in our society are false.  The basic assumption in question is that those who ‘have’ deserve what they have and those with little or nothing deserve little or nothing.  The events of the jubilee pageant served to illustrate this.  Royalty is the walking embodiment of undeserved privilege.  The young people who worked a 12-hour shift keeping the crowds safe for nothing and who were treated with blatant disregard for their most basic human rights are a clear example of those who deserve much much more.